The highlight of my tasting trips to Bordeaux, back in the days when I could justify them, was the visit to Tertre Roteboeuf, just outside the ancient walled town of St.Emilion. Home of François and Miloute Mitjavile, this beautiful, modest, utterly charming 17th century villa, built in the warm, soft limestone which is quarried hereabouts from beneath the vines, nestles atop the amphitheatre which forms the tiny vineyard on the famous St.Emilion cote. Almost unheard of twenty years ago, the wine that François so painstakingly raises here each year is now acknowledged as one of the finest of St.Emilions, indeed of all ‘Right Bank’ Bordeaux. The atmosphere here, particularly in the languid warmth of a summer’s evening, the heat of the day reflecting the scent of earth and wild herbs back from the pale rock, can somehow encapsulate everything that I love about France, perhaps that we all love about France. So tiny, so easily missed, this is for me one of the most precious places on earth.

For those who have not met Mitjavile, this marvellous sense of having stumbled into gentle perfection might easily be something of a siren call, but for those who are prepared and who are curious, the journey that awaits may well constitute amongst their most invigorating moments of human interaction. Mitjavile the man is hard to define. To call him bohemian would suggest that he somehow lacks rigour or discipline, to refer to him as merely an intellectual would make him seem aloof and undimensional. He is certainly one of the most extraordinary human beings that I have ever met, and I hope that he will forgive me for saying so. In a world in which the ego often over-asserts itself, he is entirely without arrogance, and though his opinions on a broad range of subjects are firmly held, they are painstakingly constructed and expressed with an extraordinary, quiet eloquence and a gentle, teasing humour. I can recall intense and vigorous debates ranging from the obvious, such as the definition of ‘terroir,’ to the sublime, perhaps the music of such diverse – or perhaps not so diverse – luminaries as John Dowland or Bob Dylan, and on to the ridiculous – a lengthy to and fro as to the pros and cons of the late Diana Princess of Wales springs to mind – all held across meals of transcendently sublime simplicity cooked on the elderly range by Miloute.

Mitjavile is definitively original in both the way he thinks, and in the way he operates, and he has inadvertently pioneered many of the techniques that are used, and all too often overused, in Bordeaux today. He has been referred to as the original ‘garagiste’ but the comparison does not give him any satisfaction. He was making wine at Tertre 14 years before Jean Luc Thunevin ‘invented’ Valandraud, (and less relevantly a year before Le Pin was hived off from Vieux Chateau Certan), and whilst he certainly influenced the makers of such wines, his philosophy rests not on the dubious virtues of concentration for its own sake, or indeed the not unrelated goal of acquiring a high Parker score, but on allowing, and gently encouraging, each year’s wine to be the most original possible expression of its unique place and time, of its terroir and of the conditions of its particular vintage.

I have no difficulty in making the qualitative comparison with Le Pin – indeed, Tertre can easily transcend Le Pin in difficult years – with a similar opulence of exotic fruit. About 2,000 cases are made from the 5 odd hectares of often quite steeply sloping vineyard, the old, gnarled Merlot and Cabernet Franc randomly interspersed with young grafts, the grass and wildflowers growing surprisingly tall between the rows in the midsummer. The wines are as intriguing as the man. That they are indeed classic Côte St.Emilion is not enough, for sometimes they display a delicacy and nuance that can easily bring to mind a top growers wine from say Volnay or Vosne-Romanée. There is no formula here, other that indefatigable quest for the finest and most profound expression of each year’s unique personality.

Quantities are tiny, best to e-mail or call to check availability of these and other vintages. 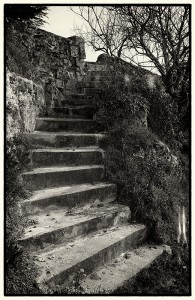 The steps to the vineyard, Tertre Rotebeouf