Jean-Michel Petit grew up in Pupillin, where his parents and grandparents farmed the vines, selling their grapes to the local cooperative. After studying in Beaune and working with producers around the world, Jean-Michel created Domaine de la Renardière in 1990 with his wife Laurence. They now have 7.5 hectares all within Arbois-Pupillin. Pupillin is a village with immense respect for organic viticulture – indeed 2/3 of Jean Michel’s neighbours are working organically. Jean-Michel has followed organic and biodynamic principles since 2010 and the Domaine became certified Organic in 2012. Each parcel is vinified separately under indigenous yeasts, and only minimal doses of SO2 are added, usually just before bottling, or sometimes not at all.

Trousseau comes from a very low yielding variety grown on clay-calcareous marl soils. For both reds, the grapes are hand harvested then vinified in stainless steel for 10-20 days, then aged in large oval shaped foudres for about a year. Arbois-Pupillin is renowned for producing Jura’s finest reds wines.

Jurassique Chardonnay comes from pure limestone terroir. The wine is vinified in barrels (228L and 400L) and aged in a combination of old barrels and foudre.

Les Terraces Savagnin Ouillé (topped up) comes from grey/blue marl terroir and is made in a non-oxidative style. The wine is aged for 12 months in barrel with no racking and beautifully expresses this delicious, indigenous variety.

Vin Jaune is made in a similar method to the Savagnin Sous-Voile however it spends longer under the veil of yeast. The AOC laws state that no racking or handling can take place and the wine must spend a minimum of 6 years in barrel. The earliest release is allowed 7 years after the harvest and must be bottled in a classic 62cl clavelin bottle. Jean Michel says once opened Vin Jaune can be kept for at least 6 months. The distinctive nutty flavours pair perfectly with two other regional specialities – Comté and Coq au Vin Jaune! 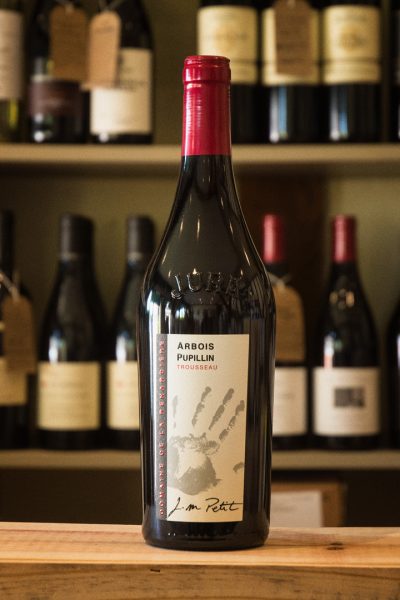