Born and raised in rural Essex, I have been involved in one aspect or another of the drinks business for over 30 years. It wasn’t my first ambition. After leaving school I took a foundation course in Art & Design, but found my love of fine and illustrative art to be strongly at odds with the ‘progressive’ fashions of the late 1970s. However, the course did leave me with an abiding passion for photography, one which has been rekindled since the advent of digital technology, and which will undoubtedly find some expression in the development of these pages.

Seeing that I was at a loose end, and feeling that my woeful lack of interest in the French language at school required rectifying, my father sent me to a respected Cognac house, where I spent some months packing boxes, entertaining high-spirited Irish wine merchants, and falling in love with France, its people, its gastronomic traditions, and its wines. Three languid summer months in the village of Avize on Champagne’s famous Cote de Blancs followed, where I lived alone in the Chateau, fed gloriously by the wife of the concierge, working in the vineyards and the cellars and on my days off cycling to Epernay and the surrounding countryside, or travelling to Reims to visit the Cathedral and the great Champagne houses. During the next summer I undertook an extended trip through the wine regions of France, spending time falling in love in turn with Bordeaux, Provence, the Rhone Valley and Burgundy.

There followed some years with my family company, one of those old, hopelessly eccentric organisations of a kind which can no longer exist, populated by unsustainable numbers of cousins, ancient aunts and the odd disagreeable uncle, which ran a small chain of pubs in East London and The City. At the age of 19 I was briefly the youngest licensee in the country, running a wine bar which featured amongst the many gems on its list a number of 1953 Classed Growth clarets (I think we sold them for around £20 a bottle). My progress took me I suppose inevitably to the position of wine buyer for the wine merchant arm of the company. In 1988 and ’89 I completed the Wine & Spirits Education Trust Diploma Examinations, taking scholarships in both the Bordeaux and Burgundy sections, awards which took me on further study trips to the respective regions.

At about this time I chanced to meet Mark Savage, a Master of Wine who possesses a famously fastidious, critical and inquisitive palate, and who I think it is fair to say generously took me under his wing. Over many years I travelled with him as he ferreted around what were then often forgotten, or simply unknown, corners of the European wine producing regions, almost all of which have subsequently risen dramatically in profile. He tempered to a useful degree the undoubted romance implied in the paragraphs above, imparting to me a more critical eye (or palate), and one which favours subtlety and nuance over the often more extracted and assertive, even brutal styles favoured by certain influential wine critics or produced in climates which impart too generous and uniform a heat. I believe it to be a style which is coming quietly into fashion as more thoughtful wine drinkers grow bored of power for its own sake, and seek instead inspiration and pleasure amongst the countless unique expressions of ‘terroir’ which the fruit of the vinifera vine is capable of imparting when grown in suitably marginal conditions and tended by hands very often and necessarily artisan of nature.

I am often asked by customers if The Black Dog of the company’s title is of the Churchillian kind. Possibly, a little, but really he is otherwise known as (Sir Archibald) Wavell, another child of Essex, Britain’s penultimate Viceroy to India and wartime Field-Marshal remembered for his considerable charm, a love of poetry and a certain misfortune in the allocation of resources to the theatres in which he was posted. In his nominal reincarnation as a black labrador he is noted for his (suspiciously) thick tail, lustrous coat, warmth of nature and appalling breath. He can often be found helping out in the shop. 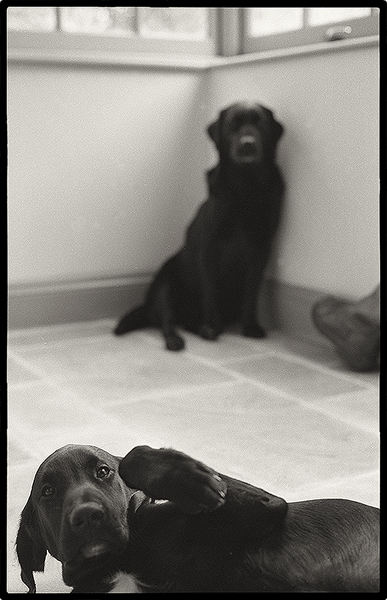