Perhaps the most significant producer of the famous Northern Rhône white, Condrieu, with 10 of the 110 hectares in the appellation, and considered in vinous circles to be something of a superstar, Yves Cuilleron had been destined for a career as a mechanical engineer when he took over the business from his uncle in 1986. He rapidly emerged as a winemaker of considerable skill and intelligence. Whilst he is particularly known for his flair with white wines, recent tastings have confirmed that he is quietly excelling with red St. Joseph and Côte Rôtie, in both of which he clearly aims to accentuate the virtues of balance, finesse and elegance rather than succumbing to the more fashionable tendency to overextract. To this end he employs, for example, the traditional methods of retaining some stalks in the fermenting vat, and carefully controlling the use of new oak. In both appellations he achieves a wonderful combination of finesse and elegance with ripe sweetness, reaching its apogee in the beautiful Côte Rôties with their bright red and black fruits interwoven with deeper notes of pepper, herbs and cigar tobacco.

Cuilleron has expanded his activities into the production of some superb Vins de Pays, or Vins de France as they have been recently renamed. With the white Marsanne, Roussanne and Viognier he picks quite late to accentuate richness and weight. The Viognier is musky and exotic, with excellent acidity and energy, the Marsanne & Roussane both superb examples of their varieties Rhône expert John Livingston-Learmonth describes them as two of the Northern Rhône’s “minor gems”, whilst the Gamay and Syrah reveal excellent depth. The latter always benefits from some cellarage, and is superb at 2-5 years. 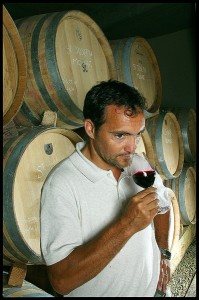