Situated in a north-west facing bowl high up above the village of Gigondas on the lower slopes of the Dentelles de Montmirail, the extraordinary outcrop that dominates this part of the Rhône valley, Pallières was long considered one the finest sources of traditional Gigondas. However, by the 1990s the estate, run by the two elderly Roux brothers, had fallen into disrepair, and given no succession, they decided to sell. In 1998 the property was bought by a consortium comprising Daniel & Frédéric Brunier of the leading Chateauneuf-du-Pape estate Domaine de Vieux Telegraphe, and Kermit Lynch, the respected Californian importer of top artisanal French wines. The new team immediately set about the restoration of the vineyard, grubbing up and replacing 5 hectares of vines, and rebuilding the terracing. A new gravity-fed winery was in place by 2002, enabling the separate parcels to be vinified individually at optimum ripeness, and the focus turned to the unique terroir – under the Roux regime only one wine was produced, but from 2007 the Bruniers have made two bottlings, one, Les Racines, from 65 year old vines grown on chalk and limestone around the house, where the emphasis is on freshness and velvety fruit, whilst Terrasse du Diable comes from vines with an average age of 45 years high up on the clay, limestone and volcanic schiste terraces, giving more structured wines with great minerality. At once gutsy, elegant, warm and refined, these are superb wines made for ageing. 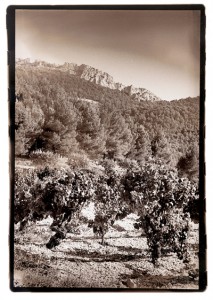